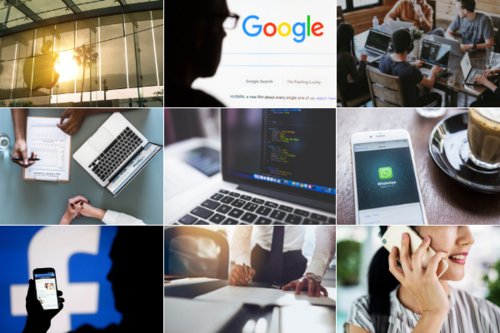 In our March technology news update, we cover Facebook and Google breaking user trust, from saving passwords to two-factor authentication. The latest technology recruitment and global business trends, as well as the latest mobile rumours, scams and much more.

Reports have found that the passwords of millions of Facebook users were accessible by up to £20,000 employees of the social network. Security researcher Brain Krebs found that up to 600 million passwords were stored in plain text, which could date back to 2012. Facebook has said it has now resolved the ‘glitch’ that stored millions of the passwords on its internal network. A source at Facebook told Mr Krebs that these data protection failures allowed developers to create applications that logged and stored the passwords without encrypting them.

Two factor authentication is said to be the best way to keep your account secure, even if a hacker nicks your password. The most popular form of 2FA, although least secure uses SMS, with the company texting you a short code after you enter your password. This means putting your trust in the company that holds your phone number to gain extra security – however Facebook have been found to abuse this trust. The social network abused phone numbers that users had given to enable two-factor authentication by allowing advertisers to target content against them.

The US tech giant has been hit with their third antitrust fine from the European Union, now totalling at €1.5 billion. Reports have found Google to abuse its dominant position by forcing customers of it’s AdSense business to sign contracts stating they would not accept advertising from rival search engines. This latest fine is its third major penalty the EU has charged Google, with last year the company was charged €4.3 billion for abusing market dominance in mobile and the year before €2.4 billion for manipulating shopping search results.

According to latest analysis by Robert Waters plc, the banking and financial services jobs are booming in the European central cities of Frankfurt, Paris and Dublin. Financial recruitment is said to have increased in these areas more so than in London. However, the UK tech sector is still growing at a steady rate despite downward pressure from Brexit and the economy. The UK continues to be a leading country in Europe in terms of candidates with IT sills and the number of roles advertised in the tech sector has increased by 11 percent from 2016 to 2018.

According to new figures published, London has been voted the top destination for businesses to locate global teams and innovate, despite Brexit uncertainty. 37% of more than 450 senior leaders of large companies surveyed viewed London as the best location for global teams, gaining the top spot ahead of New York (26%), Paris (20%) and Singapore (17%). As many businesses undergo rapid transformation through technology the research explores how recruitment, retention and business location decisions are informed by short and long-term drivers of change.

Huawei and Samsung recently introduced a wireless charging feature in some of their latest phones, giving users the ability to charge other devices wirelessly. Rumours have surfaced alleging that Apple’s next iPhone might include this feature too, along with upgraded cameras and a bigger battery.

Buzz-feed has reportedly found that ad networks have figured out a scam that lets lucrative video advertisements hide behind traditional banner ads in Android apps, so users don’t even know they’re there. Apparently the app developers are not to blame  - and were surprised to find an influx of complaints about why their apps are draining user’s batteries and eating up phone data.

WhatsApp Business begins to roll out on iOS

WhatsApp business, a separate version of the messaging app that is designed to allow businesses to communicate with their customers has begun to roll out on iOS. Along with being able to reply to customers directly, WhatsApp Business has other features that are personalised toward businesses, including away messages, greeting messages, and the ability to list info such as opening times and addresses.

Computer scientists have found a way around Google’s reCAPTCHA tests, tricking the system into thinking an artificial intelligence program is human. Google’s reCAPTCHA tests utilise behavioural analysis, requiring humans to simply tick a box declaring “I’m not a robot”. However, at the end of last year, Google released version 3 of their reCAPTCHA test which analyses a range of signals and gives a score between 0-1, lower scores more likely to be bots and higher scores more likely to be human. Scientists at the University of Toronto focused on tricking Google’s secondary system with machine learning, the invisible scoring isn’t abused but they claim they could still get past the latest reCAPTCHA test.

Click here to read more about the AI program that is said to have tricked the reCAPTCHA test.
(WIRED) 25/03/2019

The UK Government is launching an investigation to determine the levels of bias in the algorithms that could affect people’s lives. The Centre for Data Ethics and Innovation will conduct an investigation that focuses on areas where AI has incredible potential, from policing and recruitment to financial services. But it also could have serious negative impact on lives if not implemented correctly, for example when police utilise it as a tool for ‘Harm Assessment Risk’ the AI determines whether an individual is likely to cause further harm. If the algorithm is more or less effective on individuals with different characteristics over another, the issue of AI bias appears.

Reading a book can be a great way to escape, for some it can help motivate to make a change, it might make a profound impact on our lives, or for others, it can simply make us feel happier and mindful. The World Book Day theme this year is 'share a story' so I asked some of the eligoids to share a book they particularly enjoyed or made a difference to their day to day lives.

Take charge of your career

Feeling stuck in your current role? Want to move forward but not sure how? As we finally emerge from the dark, cold months of winter and spring into warmer seasons, now is a great time to take charge of your career! Want to discover what you could you do to succeed and progress in your role?

Read about how to take charge of your career here